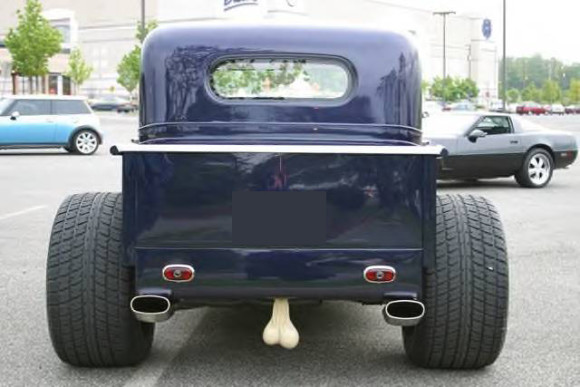 The police chief of a small South Carolina town will ask a jury to decide if a woman broke the state’s obscenity laws by driving a pickup truck with plastic testicles hanging from the back.

South Carolina law considers a bumper sticker, decal or device indecent when it describes, in an offensive way as determined by contemporary community standards, “sexual acts, excretory functions, or parts of the human body.”

The offense carries a maximum fine of $445 but no jail time, Fuda said.

“This is certainly not a staple of my ticket writing in Bonneau,” the police chief told Reuters on Wednesday.

The Charleston law firm Savage & Savage will represent Tice for free, attorney Scott Bischoff said. The trial had been scheduled for next week but was delayed because the defendant will be out of town.

“She’s such a sweet lady and she just says ‘I don’t want to pay the fine.’ We’ll let a jury decide whether this is really criminal behavior. I don’t want to take away from the importance of free speech, but it’s really comical,” he said.

Lawmakers in some states have sought to ban the colorful plastic or rubber devices that go by brand names such as Bulls Balls and Truck Nutz.

Fuda said if the fake testicles were a free speech issue, “I don’t know what they would be trying to express.”

“I went to (a) few websites that said, excuse the expression, ‘show your nuts,'” he said. “I didn’t see anywhere it said support your local proctologist or farmer.”

My Comments:
You have got to give it to the title of this article…c’mon, I am not expecting this from Reuters News.Â  Anyway, this is really funny stuff.Â  I must admit, I do find these “ball” hanging off ofÂ  trucks funny as heck.Â  I also think it is comical that it can be considered in violation of an obscenity statute; but how do you explain to your little girl what the heck is that thing hanging of the back of the truck in front of us, while your little boy is laughing his @$$ off…and saying…dad…check out those balls. Bad Dad!…Bad Dad!