College isn’t the solution for the racial wealth gap. It’s part of the problem. 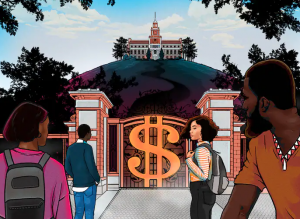 Je’lon Alexander is a Morehouse Man who graduated in 2018. He has roughly $55,000 in debt, even after a $15,000 annual scholarship. His parents, who have advanced degrees and close to $400,000 of debt between them, deferred their loans and took jobs on opposite sides of the country so they could contribute as much as they could to his education. (Je’lon, too, is deferring his loans while he pursues his master’s degree at Georgia State, with plans to get his PhD.) When Je’Lon’s mother was interviewed for my book, “The Whiteness of Wealth,” she said she did not regret any of these choices, despite the steep costs.

This is an absolute read for parents of black kids – Source: WAPO