Are Military Pensions Too 'Generous'? 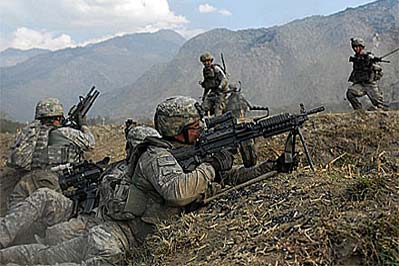 It sounds like a pretty good deal: Retire at age 38 after 20 years of work and get a monthly pension of half your salary for the rest of your life. All you have to do is join the military.

As the nation tightens its budget belt, the century-old military retirement system has come under attack as unaffordable, unfair to some who serve and overly generous compared with civilian benefits.

That very notion, laid out in a Pentagon-ordered study, sent a wave of fear and anger through the ranks of current and retired military members when it was reported in the news media this month.

My Comments:
Hmmm…I am honestly slightly conflicted by this…. I absolutely would agree with a 401k type solution with a few more additionals. Â I think the current system of not providing much support for servicemembers who have served for less than 20 years is unfair. Â I don’t support support drawing parallels to civilian systems, it simply is not equivalent. Â And I do believe that Congressional Retirement benefits should be changed before we touch the military’s.