The Middle on the Edge: Bahrain 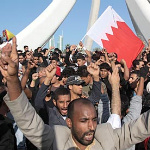 So the new year ushered in a new energy into the Middle East…and the young energetic masses from Tunis to Manama are lashing out in all directions. Â A few weeks ago, I was just chilling watching the drama unfold in Egypt from a far, now that the “House of Mubarak” has fallen – here in Bahrain, it appeared the “House of Kalifa” was on the verge of being next.

Well, not so fast though, the dynamics that conspired to dethrone the Pharoah are not quite as much present here; and although the actions of the defense force a few days into the demonstration (total of 6 people confirmed killed) seemed irrational, don’t be fooled, it was quite measured and very much calculated.

So why will the house of Khalifa not fall any time soon? Â There is a host of reasons, but let me quickly jot down four of them here:
1. Â In a single word – Arabia. The “House of Saud” provides most of what Bahrain needs to live -Â  the U.S. provides the rest (by the way, the “Kingdom” of Bahrain produces next to nothing really…no seriously). Â The country, therefore, is owned principally by Saudis, the Saudis are our “friends”, so…nuff said.

2. Â Saudi Alter Ego. Bahrain (I call it the “lower kingdom”) literally functions as Arabia’s alter ego. Â Houses frequented by “Ladies of the Night” are not “openly” allowed in Arabia, so 5 star hotels are erected here in the lower kingdom to serve such pleasures. Â There is absolutely no way that this will ever stop; in fact a few years ago, there were similar demonstrations to the recent ones, not as violent though, and the Saudis moved tanks to the border with Bahrain. They were poised to squash it, if it got out of hand. Â You know, it has been written that many-a- kingdoms have been lost because of the sinful pleasures of a woman…I think this one is a keep-her.

3. Â U.S Defense. This probably should be at the top, but no sweat…Saudis have it. Â Unlike Egypt, we are inextricably linked to Bahrain. Â They need us for their defense from regional aggressors (and believe me, this is a rough friggin’ neighborhood), and we need them to face down the Iranian threat.

4. Â Geography – This is an island man…besides it’s too damn hot! Â There is hardly any trees or even bush up on this bit*…let alone places to hide. Â Most of the population, including the more affluent, live in a small area in the north and the disgruntled masses, i.e the ones demonstrating, i.e the Shias, live in what amounts to reservations to the south. Â  Bottom-line, it’s hard to start a revolution when you can’t hide and it hot as a mofo.

On a more serious tip tho, the voices of descent are essentially marooned here on the island. Â They do enjoy some external support, primarily from Iranian, but nothing meaningful enough to be effective on any front.

So in the end, how is this gonna play out. Â Well, not like Egypt nor Yemen and definitely not like freakin’ Libya (are you kidding me!). Â And I really don’t want to make light of the situation, because it is indeed pretty serious, but if the opposition can sustain some amount of momentum, it might be able to push the kingdom to institute more reforms – primarily in education, social services and employment. Â U.S foreign policy currently touts these as staples of any democracy (operative word!), so if the opposition here in Bahrain can continue to capture the world’s attention, while pushing for these, they might be able to eeek out something.

Ps: The case of the Third Country Nationals aka (TCN) here in Bahrain is an even more Â dispicable situation. Â But that’s for another topic.