The British Empire was built on slavery then grew by antislavery

Britain ended its slave trade in 1807, and abolished slavery in much of its 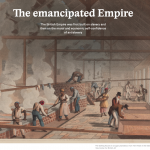 colonial empire in 1834. Four years later, Queen Victoria was crowned. For British liberals, the timing was auspicious, and the lessons were obvious. The 18th-century empire of enslaved labour, rebellious colonies and benighted protectionism had been purified by the ‘sacrifice’ of the profits of slavery to the principles of free trade, free labour and free markets. But the empire that slavery made endured.

Although individual enslaved people were often brought to Britain by the people who claimed to own them, for most Britons, mass enslavement was something that happened ‘over there’ – in the colonies, especially the sugar-producing islands of the Caribbean. This fact of geography shaped British antislavery. The ‘mother country’ could also be the stern but benignant ‘father’, correcting children in the ‘infant colonies’. In the slave colonies, opposition to slavery could be a revolutionary threat to the social order. In Britain, antislavery affirmed Britain’s superior virtue in relationship to its empire.

Source: The British Empire was built on slavery then grew by antislavery | Aeon Essays