Questioning the Existence of Adam and Eve 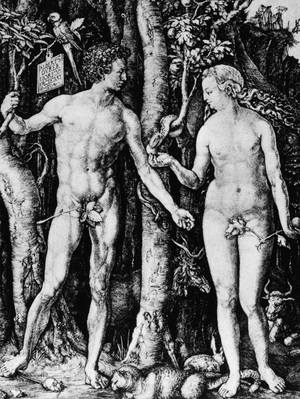 Let’s go back to the beginning â€” all the way to Adam and Eve, and to the question: Did they exist, and did all of humanity descend from that single pair? According to the Bible (Genesis 2:7), this is how humanity began: “The Lord God formed man of the dust of the ground, and breathed into his nostrils the breath of life; and man became a living soul.” God then called the man Adam, and later created Eve from Adam’s rib. Polls by Gallup and the Pew Research Center find that four out of 10 Americans believe this account. It’s a central tenet for much of conservative Christianity, from evangelicals to confessional churches such as the Christian Reformed Church.

My Comments:
I suppose questioning the existence of Adam and his female unit – Eve, can be tantamount to questioning the existence of God, but not really. Â This is a pretty important reading regarding the modern Christian view of faith. Â I think it is very insincere for some to hide behind dark ignorance and not lob questions at their belief system. Â I for one am amaze at the resolute stubborness of some who profess to have answers to the divine…to know what will happen in the hereafter…to them I say…go away from me at once and in thine own ignorance wallow. Â Pretty cool biblical speak huh…?