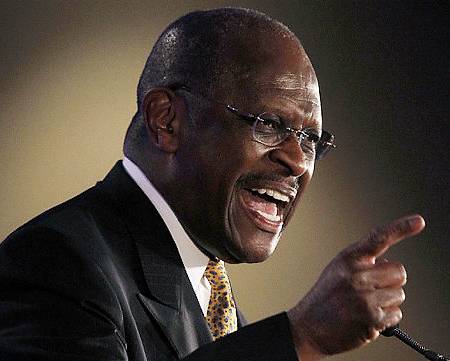 That is the question latest polls increasingly raise these days that show Herman Cain jetting to the front of theÂ GOPÂ pack.

Not since the nomination ofÂ Clarence ThomasÂ to theÂ Supreme Courthas a black conservative so disrupted the order of things at the highest levels here in Washington.

Who could forget the blood-thirsty â€œhigh-tech lynchingâ€ the left assembled to thwart him from becoming the only sitting black member of theÂ U.S. Supreme Court?

Twenty years on, the left still harbors a special hatred forÂ Justice Thomas. Meanwhile, his accuser returns to Washington and is feted all over town like a conquering hero who somehow stood up for racial justice by trying to derail the Thomas nomination.

My Comments:
Aahhmm…if he can get me a $9.99 pizza deal; otherwise not a chance in HELL dude! Â