How to empower a teen with ADHD 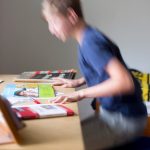 The only thing that helps me focus is if I’m genuinely interested in what I’m doing.’ Sitting across my desk was Celia, a first-year undergraduate diagnosed with attention deficit hyperactivity disorder (ADHD), who had attended my university’s ADHD summer camp when she was in middle school. As we caught up on the past five years of her life, she described how she’d felt unmotivated throughout her high-school years. Celia recalled her parents’ attempts to coax her interest in conventional subjects, such as mathematics and literature, without success. Looking down at her shoes, she described feeling left out and demoralized during her final year of high school when each of her friends had celebrated acceptances to rigorous universities.

There’s no doubt that adolescence can be incredibly challenging for girls and boys like Celia who have ADHD but, with sufficient support, they can thrive – as you’ll see when I return to Celia’s story later in this Guide.

Source: How to empower a teen with ADHD