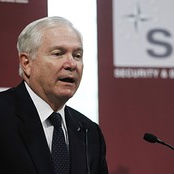 One of the NATO’s most ardent defenders and pointed critics, the outgoing U.S. defense chief scathingly identified Europe as increasingly behaving like a free rider when it came to military spending. He suggested that deep cuts in military spending across Europe showed that alliance members were unwilling to “devote the necessary resources” for their own defense.

Mr. Gates’s tough remarks were greeted with tentative applause from the audience at Brussels’ Security and Defense Agenda, a think tank.

Although the Libya mission has met its initial military objectives of grounding the Libyan air force and eroding Col. Moammar Gadhafi’s ability to mount attacks on his own citizens, the ongoing operations have exposed weaknesses in the alliance, Mr. Gates said.

While all the members of the 28-nation alliance approved the NATO operation, fewer than half are participating, and even a smaller fraction are conducting air-to-ground strike missions.

“Frankly, many of those allies sitting on the sidelines do so not because they do not want to participate, but simply because they can’t. The military capabilities simply aren’t there,” he said.

Mr. Gates, who has long been firmly in the realist-foreign-policy school, was only a reluctant supporter of the Libya operation and opposed the intervention during internal administration debates. But since the beginning of the operation, Mr. Gates has defended it on the grounds that the mission in Libya is a critical national interest to America’s key allies.

On Friday, Mr. Gates blasted the alliance for failing to develop intelligence and reconnaissance assets, forcing NATO to rely on American capabilities to develop targeting lists. “The most advanced fighter aircraft are little use if allies do not have the means to identify, process, and strike targets as part of an integrated campaign,” Mr. Gates said.

In addition, even in a campaign against a “poorly armed regime in a sparsely populated country” allies began running short on munitions after just 11 weeks, forcing the U.S. to step in and help.

Like Libya, Mr. Gates said the Afghanistan mission showed the shortcomings of NATO’s military capabilities. The alliance has had to lean heavily on the U.S. to provide helicopters, transport aircraft and unmanned surveillance drones.

Still, Mr. Gates praised NATO members for increasing troop levels last year, even in the face of growing violence. “Four years ago I never would have expected the alliance to sustain this operation at this level for this long, much less add significantly more forces in 2010,” Mr. Gates said.

But even in the face of increased operations in Afghanistan, NATO defense budgets have fallen, forcing allies to put off critical modernization programs. In the ten years since the Sept. 11, 2001 terrorist attacks, U.S. defense spending doubled. European defense spending, Mr. Gates said, fell by 15%. NATO members are supposed to spend 2% of their GDP on defense, but only five of the 28 allies meet that target.

Mr. Gates said he had long worried NATO was developing into a tiered alliance, divided between countries willing to bear the burden of military operations and those who “enjoy the benefits” but won’t share the costs. “This is no longer a hypothetical worry,” he said. “We are there today. And it is unacceptable.”

The comments came immediately after a NATO defense-ministers meeting. At the meeting NATO, after years of prodding, formally embraced a long time priority of Mr. Gates: shutting down duplicative NATO headquarters and beginning a reform process aimed at making the alliance operate more efficiently. Mr. Gates praised the reforms but noted he worried that some member countries were likely to pocket the cost savings, rather than reinvest the money in developing needed military capabilities.

After years of pressing for more spending, Mr. Gates said he has given up, noting that during the current economic turmoil defense budgets were likely to continue to fall.

Instead, he said, the alliance must focus on how to better spend its “limited, and dwindling, resources.” To preserve the alliance, Mr. Gates said, Europe must protect their defense budgets from being “further gutted” and better allocate their current spending.

If that effort fails, Mr. Gates signaled that there will be less enthusiasm in Congress for the U.S. to shoulder the cost of Europe’s defense. Mr. Gates, due to retire at the end of the month after decades of public service, often calls himself “an old Cold Warrior” and noted in his remarks that defending Europe has been “the consuming interest” of much of his life but that will not be the case for future American policy makers.

In a question-and-answer session after the speech, Mr. Gates said historical attachments U.S. leaders have had to NATO are “aging out.”

“Decisions and choices are going to be made more on what is in the best interest of the United States going forward,” he said.