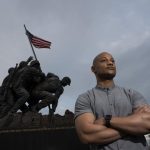 For Stephanie Davis, who grew up with little, the military was a path to the American dream, a realm where everyone would receive equal treatment. She joined the service in 1988 after finishing high school in Thomasville, Georgia, a small town said to be named for a soldier who fought in the War of 1812.

Over the course of decades, she steadily advanced, becoming a flight surgeon, commander of flight medicine at Fairchild Air Force Base and, eventually, a lieutenant colonel

My Comments:
This article is right on point.  I can attest to that.  lived it.