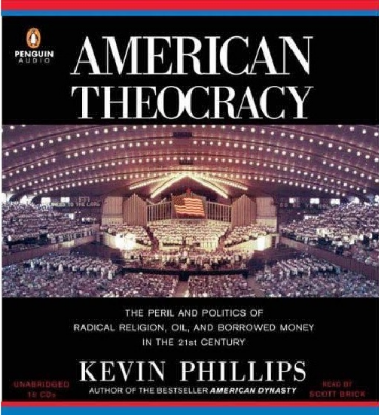 During George W. Bushâ€™s presidency, many liberal and secular Americans came to regard religious conservatives not merely as their political opponents, but as a kind of existential threat. The religious right, they decided, wasnâ€™t a normal political movement. Rather, it was an essentially illiberal force, bent on gradually replacing our secular republic with what Kevin Phillipsâ€™s 2006 best seller dubbed an â€œAmerican Theocracy.â€

These anxieties dissipated once the Republican majority imploded. In the Obama era, debates over the economy and health care crowded out arguments about sex education and embryo destruction, and liberals found a new set of right-wing extremists to worry about: Tea Party activists, birth certificate obsessives, the Koch brothers.

My Comments:
IÂ read Kevin Phillips’s book – American Theocracy when it came out in 2006.Â  I must say I am not warm to the thoughts of Bachmann and Perry touting their religious credentials.Â  Our democracy prides itself on keeping religion where it should be – a personal thing.Â  I could careless what Perry’s or Bachmann’s religious leanings are. Â I hope people of this ilk will never rise to lead this country.Â