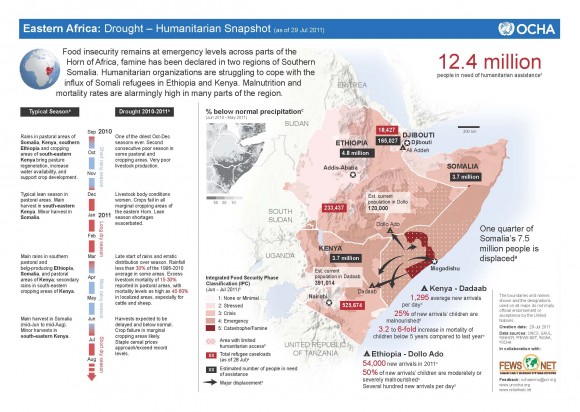 Todayâ€™sÂ New York TimesÂ devotes two-thirds of its front page above the fold to a horrific picture in color of a malnourished Somali child in a Mogadishu hospital. It caps a detailed and thoughtful report by Jeffrey Gettleman titled â€œSomalis Waste Away as Insurgents Block Escape from Famine.â€ TheÂ New York Timesâ€˜ lead story continued to be the U.S. debt-ceiling crisis and the House vote yesterday to raise the debt ceiling.Â  But the Somalia story visually dominates the paper today. Now that the debt ceiling drama is winding down, I suspect U.S. public attention, rightfully prodded by humanitarian agencies, will focus on the famine.

And, in effect, Al Shabab bears the most responsibility for the famine. The terrorist groupÂ continues to block Western aid workers during a drought that has displaced close toÂ two million people, or a quarter of Somaliaâ€™s entire population. A few years ago, Shabab dismantled a child vaccination campaign, claiming it was a Western plot; that program could have saved many children who have since succumbed to measles.Â Gettleman also reports that Shabab is preventing starving people from fleeing the areas that it controls.
Even at its best,Â food security in the HornÂ is precarious and the regionâ€™s acute drought certainly kicked-off the Somali famine.Â Elsewhere in the Horn, the food security issues equal that of Somalia. Neighboring Kenya faces a dire humanitarianÂ situationÂ inÂ its northern regions, leading toÂ criticismÂ regarding how thegovernmentÂ has handled the crisis. The UN estimates that more than 12 million in the region require assistance, and the Under Secretary General for Humanitarian Affairs Valerie Amos isÂ seekingÂ much greater international assistance. But, where insurgents do not impede disaster relief, no outright famine exists. Hence, Shabab bears responsibility forÂ much of theÂ Somali humanitarian disaster.

My Comments:
Absolutely shameful and terrible….Â