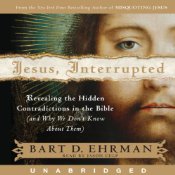 This is the book that pastors, educators, and anyone interested in the Bible have been waiting for, a clear and compelling account of the central challenges we face when attempting to reconstruct the life and message of Jesus.