Thousands of veterans living on the streets 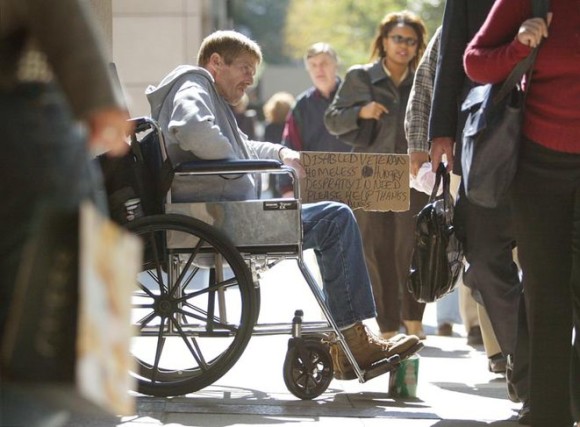 They served their country, and now the

yâ€™re being left out in the cold.Soldiers who have returned from battlegrounds in Iraq and Afghanistan are twice as likely to be living on the streets than other Americans, a new study has found.

The study by the Department of Housing and Urban Development and the Department of Veterans Affairs says that from October 2009 to September 2010, an astounding 144,842 veterans were homeless for at least one night.

â€œThis is unacceptable and weâ€™re committed to fixing the problem,â€ a Housing and Urban Development spokesman said.

Most of the disenfranchised donâ€™t have anybody to turn to. As many as 96 percent are alone in the world and only 66 percent have a family, the study found.

Veterans are considered â€œmore financially secureâ€ than nonveteran civilians but â€œhomelessness is a far greater risk,â€ with 1-in-9 vets trying to survive on the streets, the study said.

Many of the homeless vets suffer from a disability, which could include physical injuries, mental illness or substance abuse problems.

And with the military set to leave Iraq by the end of the year, there may soon be more veterans on the streets.

There has been a 3 percent drop in the number of homeless veterans since 2009, but the study shows how much work remains before the Obama administration can fulfill its pledge to end homelessness among veterans by 2014.

My Comments:
So I am reading this article yesterday, and started to find myself Â

getting pissed off at the author; here we go again, another Mr Freaking obvious pointing out what’s wrong with our little democratic experiment, wasting words…dude no one could give a rat’s nut-sack anyways.

But the more I reflect on it, the more I realized how misplaced my emotions were on this. Â Yep, maybe the piece was self-serving, but sh!t, at least he is bring it to the fore, and highlight the ills – but what can be said about our vastly inept and self-serving government; the oneÂ that pitches flowery words at this sick problem as it lines its pocket with our tax dollars, sends our young off to fight and die in distant lands, only to scorn and discriminate against those lucky or unlucky enough to make it back in one or more pieces. Â  Â This literally turns my friggin’ stomach to the core. Â

Having worn the uniform, I suppose I might be bias on this point; but for a country that claims its foundings on “Christianity” principles, whatever the heck that means, I find this most ironic and shameful; then again, irony has been a part of the American legacy…hasn’t it? Â