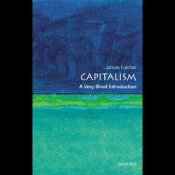 Publisher’s Summary
Capitalism deals with the issues that have preoccupied thinkers from Marx and Weber through to Cuddens and Soros. It examines not only issues of great contemporary importance, such as modern globalization and ecological crises, but also looks at examples from the ancient world.
Explaining the origins of capitalism, this Introduction raises the issue of whether capitalism indeed originated in Europe. Next it examines a distinctive stage in the development of capitalism that began in the 1980s in order to understand where we are now and the various stages that have evolved since. Fulcher goes on to explore whether capital has escaped the nation-state by going global (while emphasizing that globalizing processes are not new and questioning whether capitalism is global in character.)

The book discusses the crisis tendencies of capitalism, such as the Southeast Asian banking crisis, the collapse of the Russian economy, and the 1997-98 global financial crisis, and asks whether capitalism is doomed. In the end, the author ruminates on a possible alternative to capitalism, discussing socialism, communal and cooperative experiments, and the alternatives proposed by environmentalists.