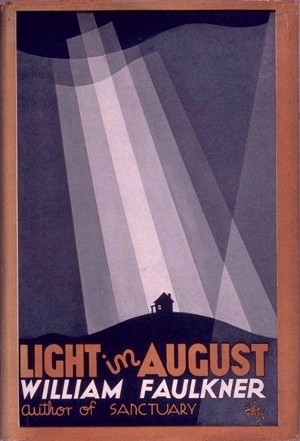 Light in AugustÂ is an exploration of racial conflict in the society of the Southern United States. Originally Faulkner planned to call the novelÂ Dark House, which also became the working title forÂ Absalom, Absalom!. Supposedly, one summer evening while sitting on a porch, his wife remarked on the strange quality that light in the south has during the month of August. Faulkner rushed out of his chair to his manuscript, scratched out the original title, and penciled inÂ Light in August; however this story is probably apocryphal given the huge symbolic role that both light and the month of August play in the novel.

My Comments:
This is my first Faulkner’s book. Â I started it in early October 2011. Â Anyone who has ever read Faulkner will tell you that he is not an easy read. Â I really loved this book however. Â And reading as a follow on from Uncle Tom’s cabin was like a continuation of a long story. Â His use of literal imagery is beyond equal. Â One of the best books I have ever read. Â I can see why Gabriel Garcia Marques adored this guy. Â