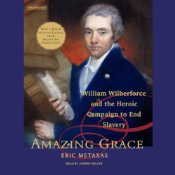 Publisher’s Summary
Amazing Grace tells the story of the remarkable life of the British abolitionist William Wilberforce (1759-1833). This accessible biography chronicles Wilberforce’s extraordinary role as a human rights activist, cultural reformer, and member of Parliament.
At the center of this heroic life was a passionate 20-year fight to abolish the British slave trade, a battle Wilberforce won in 1807, as well as efforts to abolish slavery itself in the British colonies, a victory achieved just three days before his death in 1833.

Metaxas discovers in this unsung hero a man of whom it can truly be said, “He changed the world.” Before Wilberforce, few thought slavery was wrong. After Wilberforce, most societies in the world came to see it as a great moral wrong.

This account of Wilberforce’s life will help many to become acquainted with an exceptional man who was a hero to Abraham Lincoln and an inspiration to the anti-slavery movement in America.

My Comments:
I bought this book along with a couple others, including Uncle Tom’s Cabin, in March of this year – 2011. Â Like Uncle Tom’s Cabin, I started it a couple times, but put it away, partly because of time, but also because it was slow in starting. Â After finishing Uncle Tom’s Cabin and being blown away with both the story and the writing style, I decided to pick it up again a week ago. Â I finished it yesterday and was struck by the works and awesomeness of this great man – William Wilberforce. Â This is a particular important book to me because growing up in Jamaica, his efforts had a substantial and direct impact on my life. Â It was well worth the read…well worth it.Â