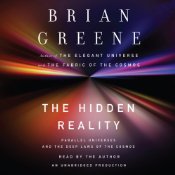 Greene, one of our foremost physicists and science writers, takes us on a captivating exploration of these parallel worlds and reveals how much of realityâ€™s true nature may be deeply hidden within them.

Really liked this book and would recommend it. Â This is the second book on the topic that I have read from Brian Greene. He is easy to read and makes a complex topic understandable.