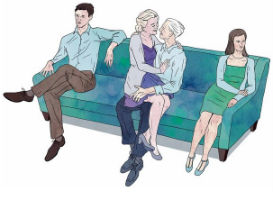 Physical pleasure binds two people together and lets them endure the inevitable pains and losses of being human. When sex becomes boring, something deeper is usually the problem â€” resentment or envy or lack of honesty. So I worry about the sudden craze for Lysistrataâ€™s solution. Why reject honey for vinegar? Donâ€™t we all deserve sugar in our bowls?

People always ask me what happened to sex since â€œFear of Flying.â€ While editing an anthology of womenâ€™s sexual writing called â€œSugar in My Bowlâ€ last year, I was fascinated to see, among younger women, a nostalgia for â€™50s-era attitudes toward sexuality. The older writers in my anthology are raunchier than the younger writers. The younger writers are obsessed with motherhood and monogamy.Â  Continue…

My Comments:
This article is really worth a read by anyone who things that close physical connections between adults are important.