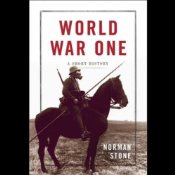 Title: World War One: A Short History by Norman Stone

Publisher’s Summary
In 1914, a new kind of war came about, bringing with it a new kind of world. World War One began on horseback, with generals employing bayonet charges to gain ground, and ended with attacks resembling the Nazi blitzkriegs. The scale of devastation was unlike anything the world had seen before: 14 million combatants died, a further 20 million were wounded, and four empires were destroyed. Even the victors’ empires were fatally damaged.
An overwhelming disaster from which the world is still recovering, World War One can seem baffling in its complexity. But now Norman Stone, one of world’s greatest military historians, has composed a dazzlingly lucid and succinct history of the conflict. Stone has distilled a lifetime of teaching, arguing, and thinking into this brisk and opinionated account of the fundamental tragedy of the 20th century.

My Comments:
I will add my comments soon…..