Title: The Assaut on Reason 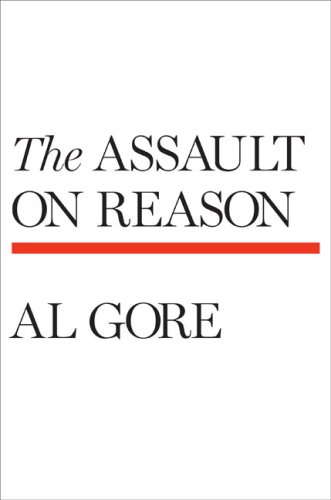 Title: The Assault on Reason by Al Gore

Publisher’s Summary:
Here is a visionary analysis of how the politics of fear, secrecy, cronyism, and blind faith have combined with the degradation of the public sphere to create an environment dangerously hostile to reason.

At the time George W. Bush ordered American forces to invade Iraq, 70 percent of Americans believed Saddam Hussein was linked to 9/11. Voters in Ohio, when asked by pollsters to list what stuck in their minds about the recent campaign, most frequently named two Bush television ads that played to fears of terrorism.

We live in an age when the 30-second television spot is the most powerful force shaping the electorate’s thinking, and America is in the hands of an administration less interested than any previous administration in sharing the truth with the citizenry. Related to this and of even greater concern is this administration’s disinterest in the process by which the truth is ascertained, the tenets of fact-based reasoning – first among them an embrace of open inquiry in which unexpected and inconvenient facts can lead to unexpected conclusions.

How did we get here? How much damage has been done to the functioning of our democracy and its role as steward of our security? Never has there been a worse time for us to lose the capacity to face the reality of our long-term challenges, from national security to the economy, from issues of health and social welfare to the environment. AsÂ The Assault on ReasonÂ explains, we have precious little time to waste.

Drawing on a life’s work in politics, as well as on the work of experts across a broad range of disciplines, Al Gore has written a farsighted and powerful manifesto for clear thinking.

My comments:
I quite liked the read and found very few faults. Â It read pretty much like a textbook and I think I would not mind attending lectures on this subject. Â I recommend.Â