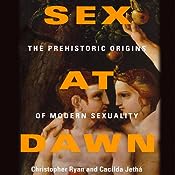 Since Darwin’s day, we’ve been told that sexual monogamy comes naturally to our species. Mainstream science – as well as religious and cultural institutions – has maintained that men and women evolved in families in which a man’s possessions and protection were exchanged for a woman’s fertility and fidelity. But this narrative is collapsing. Fewer and fewer couples are getting married, and divorce rates keep climbing as adultery and flagging libido drag down even seemingly solid marriages.

How can reality be reconciled with the accepted narrative? It can’t be, according to renegade thinkers Christopher Ryan and Cacilda Jetha. While debunking almost everything we “know” about sex, they offer a bold alternative explanation in this provocative and brilliant book.

Ryan and Jetha’s central contention is that human beings evolved in egalitarian groups that shared food, child care, and, often, sexual partners. Weaving together convergent, frequently overlooked evidence from anthropology, archaeology, primatology, anatomy, and psychosexuality, the authors show how far from human nature monogamy really is. Human beings everywhere and in every era have confronted the same familiar, intimate situations in surprisingly different ways. The authors expose the ancient roots of human sexuality while pointing toward a more optimistic future illuminated by our innate capacities for love, cooperation, and generosity.

My Comments:
One of the most interesting and informative books I have read in a very long time.Â  I highly recommned it.