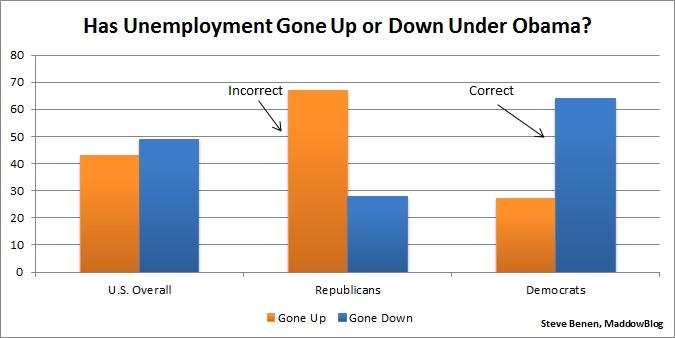 Has unemployment gone up or down in the Obama era? There’s an objective truth, which Republican voters choose not to believe.

“It’s a fact that unemployment has gone down and the stock market has gone up during the Obama administration,” said Dean Debnam, President of Public Policy Polling. “But GOP voters treat these things more as issues of opinion than issues of fact.”

Source: The persistence of the reality gap matters | MSNBC

My Comments: This sh** is just too irksome.  Call it cognitive dissonance or whatever, but it is clear, the reason one group of the electorate would choose to believe bullshit is because they are full of it.  The fact is – it really does not matter though, we will have a chance to court disaster again.  It wasn’t too long ago the same bitter f**** were running away from the previous administration, fretting that the country faced an existential threat brought on by principles of scarcity, racism and xenophobia espoused then and also now, by so called republicans/ conservatives.  Nothing about these folks are republican or conservative.  Stripped of these cloak, what we see are a bunch of xenophobes upon whose ignorance the political class is playing this whole game.

No matter, let’s go back to the principles of the previous administration, let’s replay those ideas (still being served up by the current “so called” conservative political class);   principles that had us on the brink of a catastrophe; let’s go ahead and drive this Bi*** into the ditch.  Maybe it is about time we turn this bus over, maybe only then we can all rise from the bottom together…bring it on.