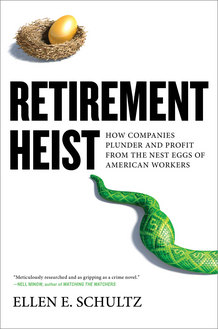 As companies have been moving away from traditional pension plans, they have been shifting employees to new retirement plans, such as 401(k)s, that transfer the cost â€” and the risk â€” to workers.

“The main narrative is that [companies] are struggling to pay both their pensions and these unexpectedly high health care costs for the retirees,” Schultz says. “What isn’t known is that companies were well-prepared for this phenomenon. The plans were in fact significantly overfunded. They had more than enough to pay every dime for every person currently employed and already retired.”

My Comments:
Yet another way of fleecing hard working Americans. Â I am not one for conspiracy theories, but when CEO’s are running off with multi-millon dollar compensations and hundreds of millions in retirement, how can one stomach not paying the pittance to someone who has been robbed of his/her life’s energies over decades…it is quite wicked…quite wicked indeed.

I have not bought the book yet, but it is on my list to read. Â  Â Â