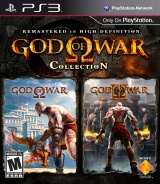 Borrowed the God of War Collection from a friend after purchasing and beating God of War III. I am currently on my final battle with Zeus, hope to beat him today. I will update below when I do.

In God of War, players take on the role of Kratos, a Spartan warrior. Plagued by the nightmares of his past, the ash covered warrior would do anything to be free of his debt to the Gods and the memories that haunt him. For ten years he has labored for Olympus, now on the verge of losing all hope, the Gods have given him one last task. Destroy Ares, the God of War. Armed with the deadly chained Blades of Chaos, Kratos will have to overcome armies of mythological monsters, legions of undead soldiers, and dangerous and brutal landscapes.

In God of War II, Kratos sits atop his Olympus throne, as the new God of War â€“ far more ruthless than Ares ever was. To end his continued torment, Kratos must journey to the far reaches of the earth and defeat untold horrors and alter that which no mortal, or god has ever changed…his fate.