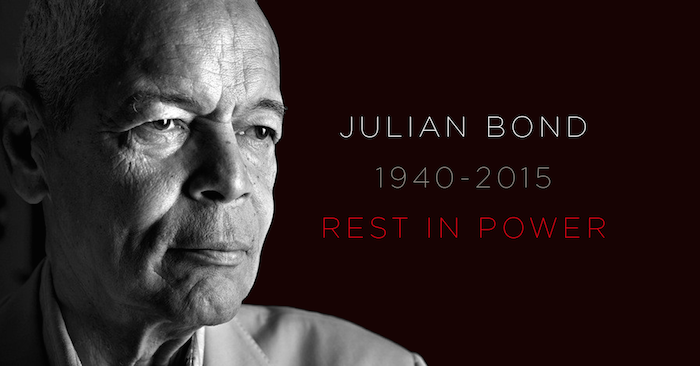 He was a revolutionary.

Those who knew him best also describe Julian Bond as a civil rights icon, a pioneer, a poet and a national treasure.

Bond, who was a founding member of the Student Nonviolent Coordinating Committee and a chairman of the NAACP, passed away at his home in Florida on Saturday, August 15, 2015.

A true activist, he was known for fighting for causes that were not easily winnable. He organized sit-ins as a student at Morehouse College in the late 1950s. He passionately opposed the Vietnam War.  And as NAACP chairman emeritus and board member, he advocated for marriage equality and LGBT rights. Julian Bond was a constant campaigner for the liberation of all people, and it was not only this belief but his actions that followed which will have him remembered forever as a leader in the broader human rights struggle.

In 1966, when Bond should have been sworn in as a state representative, his white colleagues in the Georgia General Assembly barred him from taking his seat because of his opposition to the Vietnam War. When a reporter asked him to explain his previous statements on the war, Bond said, “[It is] hypocritical for us to maintain that we are fighting for liberty in other places and we are not guaranteeing liberty to citizens inside the continental United States.”

This show of determination and commitment to justice is why we will hold fast to Julian Bond’s memory. His reach extends far beyond his own generation’s advocacy for civil rights and continues to motivate us to work to amplify the voices of Black people. As the SNCC communications director turned movement leader, he helped build the foundation of the civil rights movement on which all justice-oriented organizations, including ColorOfChange, are able to organize today.

Congressman John Lewis said in a recent interview about his late colleague and friend, “Julian must be remembered as one who inspired another generation of young people to stand up, to speak up and speak out.”  We are part of the generation that he inspired to fight racism and oppression. As we remember Julian Bond, will you join us?