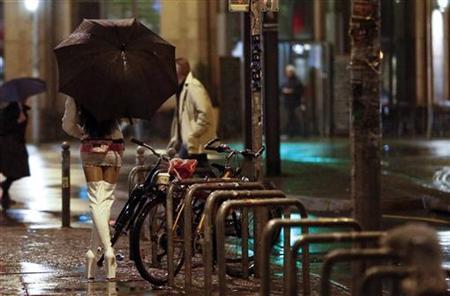 Prostitutes in the German city of Bonn must carry a ticket purchased from a new parking meter-like machine while working the streets or face hefty fines from tax authorities in a scheme launched on Monday night.

In Germany, ladies of the night pay income tax — the level of which varies from region to region — but compliance is difficult to enforce with women seeking business on the street.

Germany’s first “sex tax meters,” from which prostitutes can purchase a ticket for 6 euros ($8.72) per night, will ensure the tax system is fairly implemented, a city spokeswoman said.

“Inspectors will monitor compliance — not every evening but frequently,” the spokeswoman told Reuters.

If caught without a valid ticket, offenders will first be reprimanded, then face fines and later even a ban.

About 200 prostitutes work in Bonn. Due to protests from residents, city officials have limited the areas of operation to specific quarters.

But critics say this has made it easier for prostitutes to ply their trade. The city has erected what officials call “consummation areas,” wooden parking garages where customers driving cars can retreat to with prostitutes. ($1 = 0.688 Euros)

My Comments:
Well…the world oldest occupation…the Germans might have the right approach.